Duncan Garrow’s research interests include the Mesolithic-Neolithic transition; long-term histories of deposition; burial practices; the integration of commercial sector and university-based archaeology; archaeological theory; and interdisciplinary approaches to material culture. He teaches later European prehistory (with a particular focus on Britain) and archaeological theory at the University of Reading. Duncan’s PhD was on Neolithic and Early Bronze Age pits in East Anglia. Over the last ten years he has co-directed (with Fraser Sturt) a series of excavations in the Channel Islands, the Outer Hebrides and the Isles of Scilly as part of the AHRC-funded Neolithic Stepping Stones and Islands of Stone: Neolithic crannogs in the Outer Hebrides projects. Duncan was the lead investigator (with Melanie Giles and Neil Wilkin) on the AHRC-funded Prehistoric Grave Goods Project (PGGP) published by Oxbow Books. He is currently working on a book exploring ‘ritual’ deposition in British prehistory, from the Palaeolithic through to the Iron Age and is a co-investigator (with Neil Wilkin) on the AHRC-funded Icons in Context: Rethinking Symbols of Power at the Time of Stonehenge project.

Melanie Giles is Senior Lecturer at the University of Manchester, and a specialist on the Iron Age, particularly Celtic art, crafting and power, the square barrow burials and chariots of Yorkshire, as well as the bog bodies of north-western Europe. She works not just on the analysis and interpretation of burials but on aspects of visualisation and display. Her publications include ‘A forged glamour: landscape, identity and material culture in the Iron Age’ (2012, Windgather Press) and the recent edited volume with Howard Williams ‘Archaeologists and the Dead: Mortuary Archaeology in Contemporary Society’ (2016, Oxford University Press). Alongside work on PGGP, Melanie collaborated with Karina Croucher on the AHRC-funded Continuing Bonds Project. Melanie’s new Open Access book – Bog Bodies: Face to face with the past – is published by Manchester University Press.

Anwen Cooper is interested in the Bronze and Iron Ages in north-west Europe (with a focus on the British Bronze Age), interpretative approaches to material culture, landscape and archaeological practice, and prehistoric pottery. Following ten years of fieldwork (survey and excavation) from 1996-2006, her PhD offered a multidisciplinary perspective on research in British prehistory over the last 40 years. Over the last ten years she has worked as a postdoctoral researcher on the AHRC-funded ‘Island of the dead?’ project (University of Durham), the ERC-funded English Landscape and Identities project (EngLaId) (University of Oxford) and PGGP (University of Manchester). In recent publications, Anwen has explored archaeological ‘big data’, matters of time and scale in English landscape archaeology, and understated burial objects. Alongside work on BOP, Anwen will be working as a Senior Researcher at the Cambridge Archaeological Unit (University of Cambridge) and as a postdoctoral researcher on the Leverhulme-funded Ebb and Flow Project. 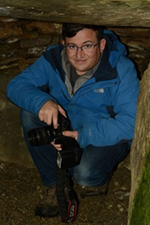 Hugo Anderson-Whymark joined NMS’s Scottish History and Archaeology Department in spring 2018 as Curator Prehistory (Neolithic). He holds responsibility for the Palaeolithic, Mesolithic and Neolithic collections. Hugo’s archaeological research interests span the Upper Palaeolithic to Bronze Age in Britain and beyond and include the application of digital technologies, particularly applications of photogrammetry for the recording, analysis and dissemination of archaeological sites, monuments and artefacts.